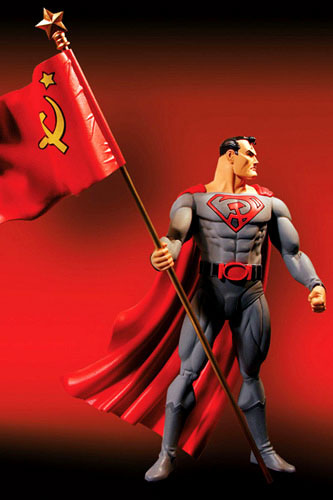 ”Man will make it his purpose to master his own feelings, to raise his instincts to the heights of consciousness, to make them transparent, to extend the wires of his will into hidden recesses, and thereby to raise himself to a new plain, to create a higher social biologic type, or, if you please, a superman.” 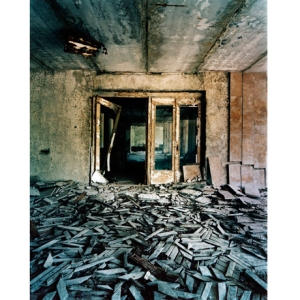 In gallery one we have Jane and Louise Wilson’s photographs of the ghost town Pripyat near Chernobyl, 24 years on from the Chernobyl power plant disaster. The nuclear fallout resulted in the town being evacuated. Sandwiched in between these images is a re-making of a Rodchenko sculpture. From a purely formal point of view this is clumsy as it means the space is shared and has to be lighted as a compromise between the sculpture and the photographs. The photographs are denied the space to be viewed as a holistic whole, on their own. As a group they are defined, in context of the space by these re-occurring yardsticks.

I think the properly dialectical way to talk through the artworks in gallery one would be to wonder or ask what the Chernobyl disaster was from the perspective of the spirit Rodchenko was attempting to convey and embody in his work. Many people conclude that Chernobyl was a greater tragedy than the fall of the Berlin Wall for the dominant Marxist-Leninist project of the USSR. I’ll hopefully explain why too as well, purely from the perspective of Marxist-Leninist teleology  This is Gorbachev’s position incidentally too: that the Chernobyl disaster- rather than the fall of the Berlin Wall – was the most important element in the collapse of the USSR.[1]

Teleology is a Greek derived word, coming from the root ‘Telos’ meaning ‘end or purpose’. Marxist teleology is a paradox: through modern Capitalism, Communism will emerge which will be the overcoming of millennia of exploitation.

I don’t want to presume too much background knowledge, but id imagine you all have an idea of what happened 25 years ago at Chernobyl: nuclear power plant goes up thus releasing toxic, radioactive fumes into the atmosphere, meaning Pripyat- the city built to house the workers- had to be abandoned. Some estimates- depending on how it’s counted- estimate that maybe 200,000 may have died as a direct consequence of the fallout. The photos are obviously from the abandoned city of Pripyat, which is now a ghost town.

Marxist-Leninism was the official ideology of the workers’ state of the USSR and the ideology which gave birth to the ‘Atom Grad’ of Pripyat. The USSR was from the vantage point of Marxist-Leninism, the society of the distant past, present and, of course, future. Communism for Marx was the way things should be- the ‘Telos‘ of history. The Soviet Union was a dream of the communist future, technological, and scientific. Run by perfect ‘New Soviet Man’. The history of humanity for Marx was the history of workers’ being exploited but it was only under the conditions of capitalism that the workers’ could final realise humanities’ inherent Communistic potential as an end in itself to organise society. The Soviet Communist state was paradoxically both a means to an end in communism,meaning it was a harbinger of what was to come, as well as being the Communist future realised in itself. These positions were both- from the vantage point of dialectical materialism- correct.

Communism is a hard thing to define, but for the purpose of explaining the art, id like to focus on the paradoxes at the heart of the creation of a Communist state. As capitalism makes the worker just another cog in a machine, a modernist Communism builds and re-appropriates this exploitation to create socialism. A workers’ state where private property and commercial enterprise were minimised re-created this exploitation to ‘reach’ the end goal of Communism. Communism in a teleological sense promotes the public means of production for the aim of creating a classless, stateless and egalitarian society.

More background i’d imagine will be needed on Alexander Rodchenko- especially  for those who didn’t go to art school. Rodchenko was a Russian modernist artist and ardent Communist. It’s one of his sculptures that Jane and Louise Wilson have recreated from yardsticks and placed in gallery one. He was a Russian constructivist, a group who were the artistic vanguard of the 1910 and 1920’s in Russia.

He was famous for saying ‘we need a country of engineers, scientists- not engineers’[2] He was a student and product of Marxist-Leninism, which was a political philosophy which, once in power, would unleash its productive capacities to shape and condition the ‘Soviet New Man’[3]. This subject would be a man disciplined, focused, and have his desires remade and shaped to help the construction of the Soviet state.

The USSR was a project governed solely by philosophy and was legitimised solely from the conclusions of Marxist-Leninist logic. The leadership only had one means of legitimising itself, therefore. What is Marxist-Leninist logic then? It is to think and act in paradox. This is the conclusion you can read in say Boris Groys’ history of the Soviet Union, ‘The Communist Post-script’ . To think and act as a ‘Soviet New Man’ is to think in paradox. That the movement will liberate you from capitalism, but at what cost to you as a person? Will you become passive to the newer forms of exploitation?

Paradox is inscribed at the heart of the Communist state. For example, Communism as the movement to emancipate the workers’ could only emerge out of capitalism at its most exploitative. To explain, the capitalist provides the means for the workers’ to organise, to meet, to unite in a common cause. Communism can only come out of the most exploitative capitalism. This is a paradox when to create communism one needs capitalism. From the perspective of cold logic this is silly, but from the perspective of dialectical materialism, purely sound. Contradcitionry positions were often stated by Marx, and these contradictions, to paraphrase Marx, became real material forces as the ideas which shaping the USSR. The dialectic is of course, against common sense, and therefore creates it own in return.

Marxism was a modernist philosophy and projects such as Chernobyl were the modernist, technological dream of a Marxist society realised. And I think this is also how Marx grasps modernism. These Soviet ‘Atom Grads’ were both a propaganda tool, a beacon of hope in the otherwise miserable Soviet Union- that the dream is continuing, ( access wasn’t too restrictive, for example) Chernobyl was the Soviet Union at its most advanced in terms of technology and workers’ organisation, otherwise their ‘Marxist-Leninist’ dream realised.

So back to my original line of enquiry, or attempt to understand the works in gallery one. Why does the sculpture need to be there? Its purely conceptual trick, I would argue, of course practical factors come in but in the main it s a conceptual argument. The artists I think are placing the two epochs in dialogue, Rodchenko’s early soviet enthusiasm and the bitter end. The yardsticks literal measurements of space and distance, however the artists- as they talk on the video- like the yardstick to be at least ambivalent, if not completely open minded in what connotations they may suggest.

If the yardsticks imply a measurement of time. There is a radically critical motif implied here:  that Chernobyl as well as being an objective tragedy was also a catastrophe for this alternative project of the Soviet New man. The modernist utopia envisioned for the workers’ could no longer be even moderately imagined anymore. Chernobyl was the end of a dream. The future was no longer Communist. Khrushchev wept as American grandchildren would not be Communists.[4] History was proven to be against the Soviet dream.

Communist leaders are not stupid; they only have a logic that is valid from the perspective from Material Dialectics. The USSR disbanding was from the perspective of Marxism not a bad thing. Capitalism emerging in china is in keeping with certain develop mentalist ideas of Marx; its happens all the time in communist regimes to define how much capitalism ‘gets in’. Far from being an anomaly I’ll be controversial and say that the use of capitalism to create economic grow is not an intrinsically anti-Marxist position- that a ‘develop mentalist’ approach to Marxism sees a role for capitalist economic production.

Communism as an idea was always based on paradox, it held its own logic and I think it’s only fitting that therefore the photographs contain a paradox too. To truly convey a tragedy it wouldn’t have been enough to have black and white grainy, miserable photographs. To convey the true tragedy they had to be larger than life, fully blown up, tinged, long focus using expensive equipment, long exposure. The misery had to be studied and cold, paradoxically to have an emotional resonance with the viewer. Their power is in their lack of human warm.

It is only through this paradox- a paradox consistent with dialectical materialism- that true misery can only be conveyed on a big scale, high end production techniques and state of the art technology. Also, let’s not forget that these photographs were made in a factory.

Another paradox is that to see the full conceptual power of the photographs they have to be ‘shared’ to be seen in light with the Rodchenko sculpture, as not to purely focus on their humanistic pity, but to direct the viewer’s pathos towards the project of utopia itself and its grim 20th century end.

To really also convey the plight of the Soviet New Man, the photographs had to be absent of all figuration or animal traces, certainly no other dark tourists or people wandering in curiosity. It was a lonely death for the Soviet Superman. 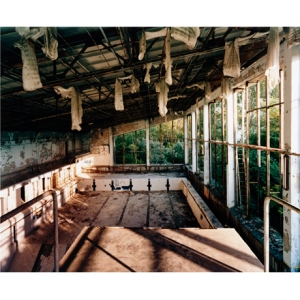